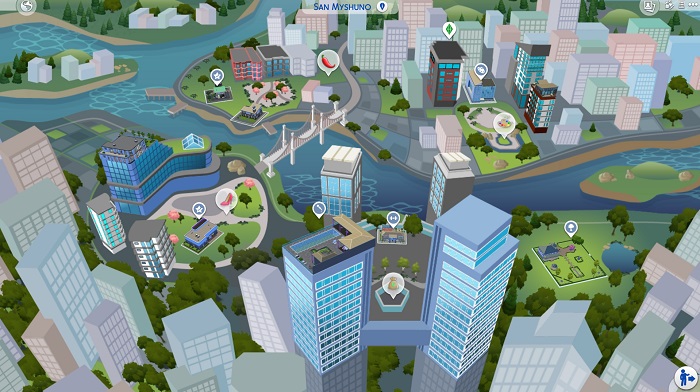 About The Apartment Switch

The Apartment Switch is a generational challenge all about building, decorating, making money, and most of all learning about the “City Living” Expansion for The Sims 4. It was heavily inspired by the Drifter Challenge by Vihisha Tak’Nai and the Movin’ On Up challenge by ImaginingMystic. It also could be said there’s a little of a Legacy Challenge by PinStar in it as well. It requires, obviously, that you own Sims 4 Base game and the City Living expansion, but can be completed without any others. The challenge takes place exclusively in the San Myshuno neighborhood in Sims 4, although travel to the other neighborhoods is not restricted. There are also two difficulties available for The Apartment Switch, Normal and Extreme, but I’ll explain more about them later. As for other expansions, having or not having them won’t make much difference in how the Challenge plays. I know that, in particular, the Seasons expansion will make things a lot harder on other challenges, but it definitely won’t “break” The Apartment Switch, since apartments are largely indoors and you don’t have to do much in the way of “Lawn Living.” The only expansion that is expressly forbidden is Vampires, and I just restrict having vampires as a playable lifestate for the purposes of this challenge.

Each Switch is made up for four interlinked challenges each requiring that you build and/or decorate an apartment. In other words, each switch is four apartments long. With six individual Switches, this means that by the end of the challenge you will have built and/or decorated twenty four total apartments.. and what an achievement that will be!

At the beginning of each “Switch” your heir will be forced back to starting with 0 Simoleons. This is most definitely on purpose to make the challenge.. well, a challenge. Each Switch can be played separately with a brand new sim, but it’s meant to be played with an heir from the previous Switch. However, inside each switch you won’t be starting back from 0 for each successive apartment. In other words, feel free to save up as much money as you wish before moving onto the next apartment within a switch. Having that buffer can make the next apartment much easier.. but waiting more time before moving will make getting all your goals done before the next challenge harder.. so the two must be balanced carefully.

The rest of this page is devoted to some general information about the challenge. Be sure to read it carefully before you move on. After that, move onto Getting Started, and then through the six switch pages as you play. I separated everything out so that people who don’t want spoilers can avoid them easily. I include the links to all Apartment Switch rule pages here, that way you can get around easily, but the pages are all directly linked, as well.

These apply to all Switches, all of the time, so read them carefully.

It is possible to score the Apartment Switch Challenge, but not necessary. If you’re just not into counting points, that’s perfectly fine! I added a point system just so players who want can a measure of how well they did at the challenge. (Face it, some people like using points for their challenges.) I tried to make the point categories simple so it’s easier to remember and keep track of them.

I have the points set up so that you get 100 points for completing a switch with a married couple and one child, their heir, at young adult stage and ready to move on.. but, there are ways (obviously) to make more or less than that. 100 points per switch is a successfully completed Switch challenge, with 600 total for the full challenge. How do you think you’ll measure up?

Part of the fun of doing a challenge is sharing what you made with other people. Obviously, you don’t have to, but I want the option to be there. There are three ways I made of sharing your content – feel free to use any or all of them!

Posting on the Forums

I invented the #apartmentswitch hashtag so that everyone can find items you upload to the Sims 4 Gallery. This includes any rooms, apartments, and/or sims you create while playing the Apartment Switch challenge. Of note: Apartments can not be uploaded in their entirety unless you use the trick listed on this page: https://platinumsimmers.com/articles/how-to-upload-apartments/. You can upload separate rooms, though.

First of all, I want to thank Vihisha for her fabulous Drifter Challenge. Without that challenge, this one never would have happened. Second, thanks for the Movin’ On Up challenge, because, again, without trying that challenge, this one would not have happened. I must also send a really big thank you to my teenage daughter, who was instrumental in helping me flesh out the challenge and wading through the craziness of the initial play testing. Those being said, I must also thank my play testers and fellow Drifters who helped in so many ways to make this challenge a reality. Special thanks go to Vihisha, Illusie, and misfit091376 who went above and beyond helping to get this challenge to get going!

Originally, I designed the challenge to be played directly following a trip through the Drifter Challenge so as to contribute to building your own full world. Another challenge it would fit very well with is the Build Newcrest challenge, and you’re always welcome to also try building any other neighborhood the Sims 4 puts out.

–> Go to Getting Started