First, we check on our goals… Again, I rolled randomly for them.. and by what I got.. I’m wishing I hadn’t. LOL.

Our first task, after checking the goals.. is to make our second sim. In the hopes that said sim has time to do anything with us working on the retail career. So.. Meet Brynn. 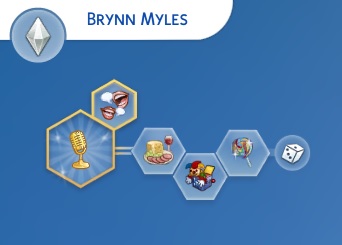 Next task: give Brent a makeover. He’s going to be a business man, after all. Hoodie and ripped jeans just don’t cut it anymore.

Third: we load the house to one bed missing. As in, one sim doesn’t have a place to sleep. Namely Brynn. And Brock probably doesn’t want the kiddie bedroom. So things have got to be changed.

I changed the master bedroom upstairs to be used for Brent.. 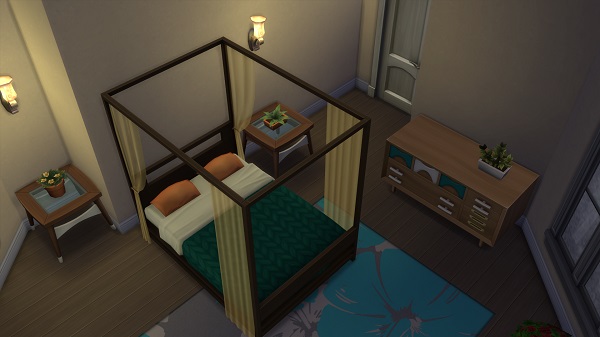 And built an entire downstairs with a guest suite for Brock and Aiden.

Then I started playing. Finally.

Brynn gets her job… 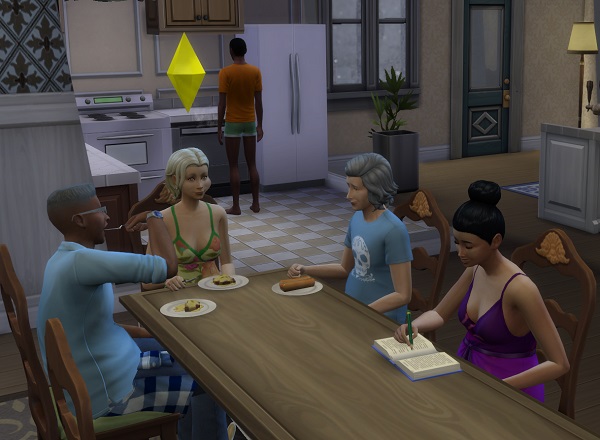 .. They all sit down to breakfast… I got to buy the retail lot… and then everything goes wrong.

Now, to make a long story short.. things didn’t work out as planned, and I noticed that most of our money had mysteriously disappeared. I *think* it bugged when I added a sim to the family, but I can’t be sure. So, I saved a backup of the save, saved the family to my library to make sure I didn’t “lose” Brynn.. and recovered the save to the last time before I started all this new stuff. Money still there. Okayyy… so I added the family from the bin to a lot, moved Brynn over to the one with the money.. and yep. money still there. Deleted the bin family, and .. then realized I still had to fix the house and re-do Brent’s makeover. (As I’m typing this, I kept having to change Brent’s name, because for some reason I was calling him Brock.. wtg Thrall.) So.. I got lazy on the house. And this is what I did. 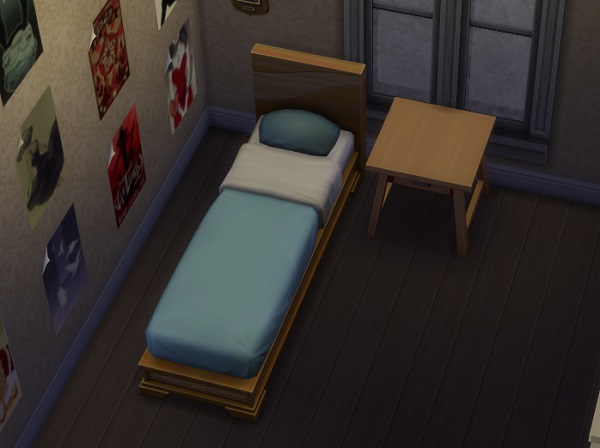 Stuck Brynn’s bed in the hallway of collections.. 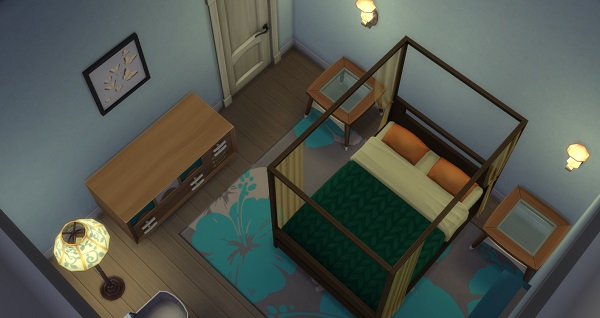 .. And upgraded Brent’s kid room to a “master” bedroom for him. And eventually, Brynn.

Then.. Brent’s makeover. Luckily I hadn’t changed a huge amount, and I remembered most of the clothes I had picked out.. so it went pretty smoothly.. and I didn’t have to take a new picture. 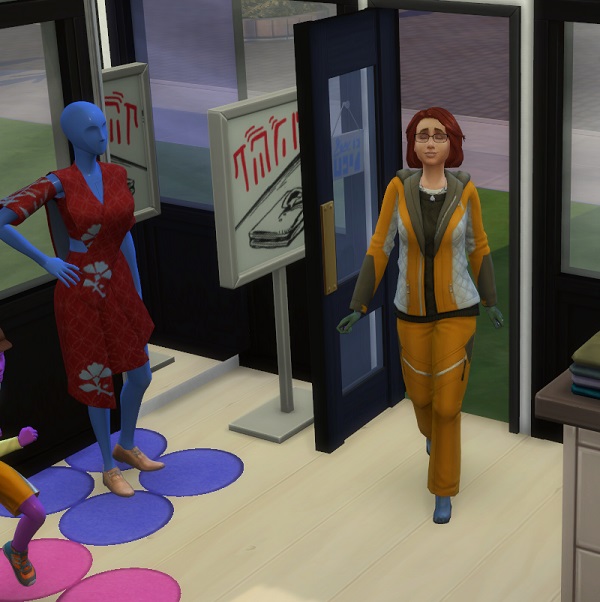 Our first customer. I plopped an EA Get to Work room down, and eventually edited a bit to get the “store”.. it’ll grow as we get funds to do it.

Took Brynn out to dinner.. it looks a little awkward to start with. 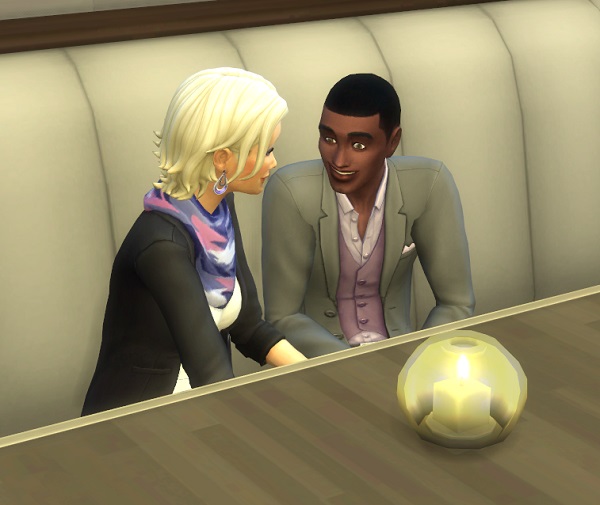 But pretty soon they’re really getting along..

The store gets a bathroom.. because.. well.. I forgot about one earlier.

Here’s what the outside of the store looks like. 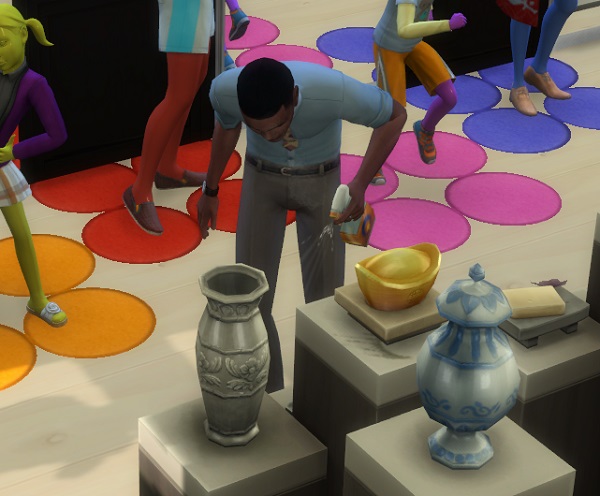 Shelves get dirty. Who knew?

… who is learning skills quickly!

Breanna got her “A” today.. so it’s time for her to see the world. 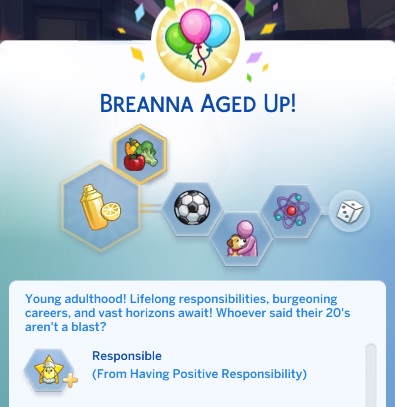 She moves in with her aunties. 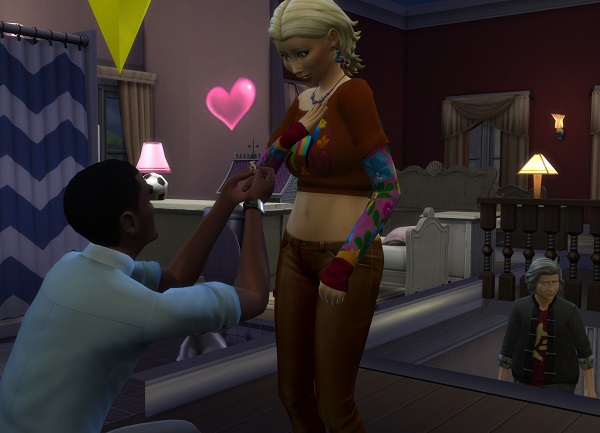 I finally get around to getting Brynn and Brent Hitched.

Aiden: *side eye of disapproval* “You should have had a wedding party!!”

Yep. I should have. 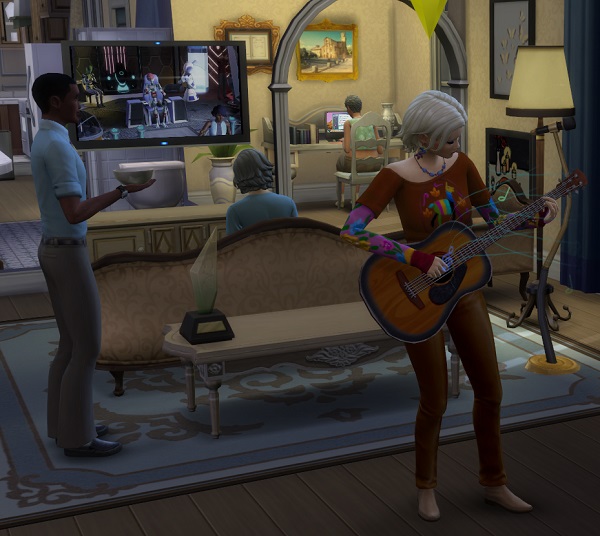 And there were skills that needed working on. That trophy on the coffee table, by the way, was the gold reward from Aiden’s Charity party. Pretty cool looking.

She’s just so pretty. I hope she makes cute babies!! 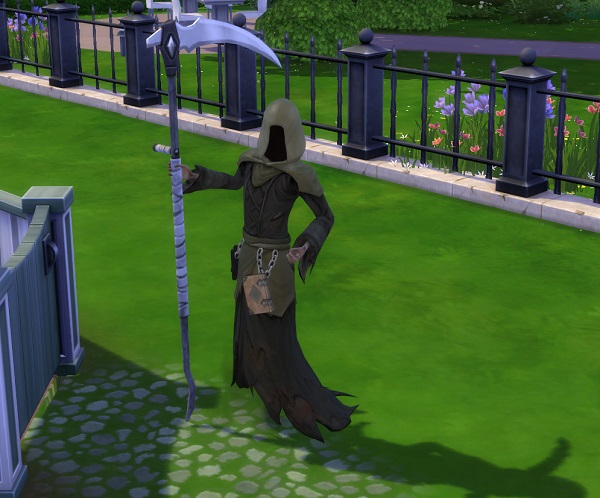 We use our polite introduction, ask him to hang out, and a couple more socials… 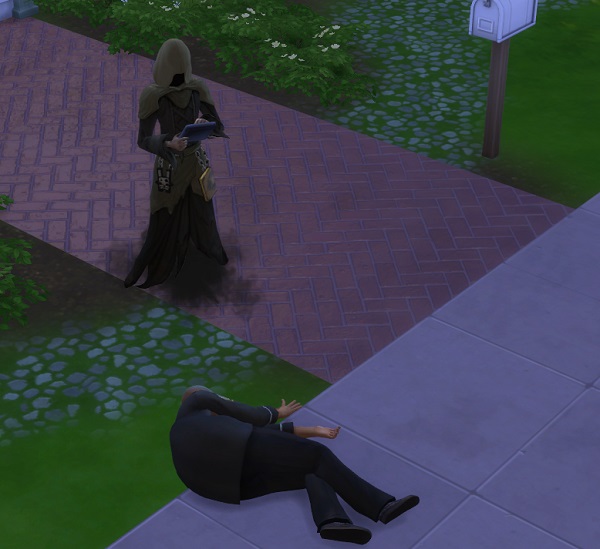 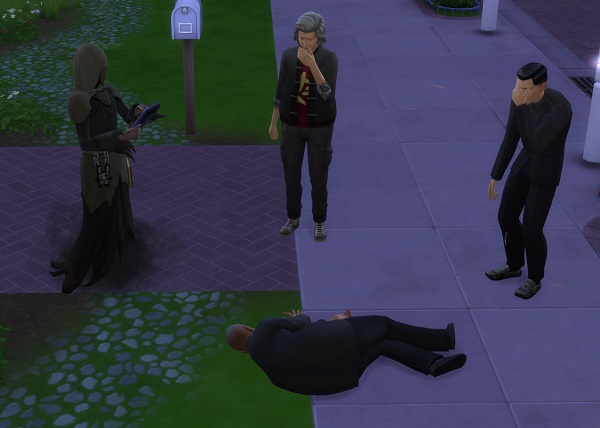 Don’t know why Victor Feng is so sad. We didn’t even know the guy. But oh well. Now I’m down to a family of three. And Aiden shouldn’t be too far behind these other two deaths. So this house is going to get a whole lot easier really fast. But that’s the end of the sim-week.. so time for me to move on to another save!

I am a 43 year old American demi-gender wife, mother, and gamer. My pronouns are she/they. I've lived in the Midwest most of my life, and enjoy it for the changing seasons. My favorite movie is Labyrinth, my favorite game is Sims 4, and I have tattoos related to both. My favorite colors are purple, red, and green. When I'm not playing games (which is rare) I also enjoy music, reading, crafting, and coloring. My newest obsession is streaming Sims 4 on Twitch. I'm also an animal lover, and have had many types of pets over the years. Currently, I have a dog named Cassie who is a Jack Russel / Beagle mix and a trio of pet rats that we adopted from a local rescue. View All Posts