First thing.. we check on the goals for this part of house 007:

Second, we have some set up to do:

They’re now back in their house…

And the options are set to aging again. 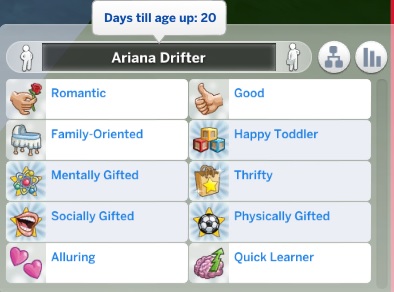 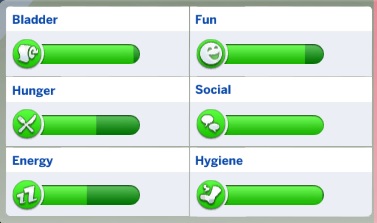 And we’re ready to go. Being that we start right after the party in part 1.. it’s 9:30 pm and both of them are feeling pretty good. That’s not going to last forever.

I have them become best friends.. but I hold off on the wedding.. because, for a change, I’d like to give my sims a real wedding… I think. We’ll see how long that resolve lasts. (it lasts)

The very first day takes forever. There’s nothing to harvest, and no money for anything.. so I spend the day inviting over the Part 1 contestants and telling them Ariana wants to “just be friends”.. that way it’s not awkward later on. At least, I hope that’s how it works out.

What are these filthy sims so happy about? 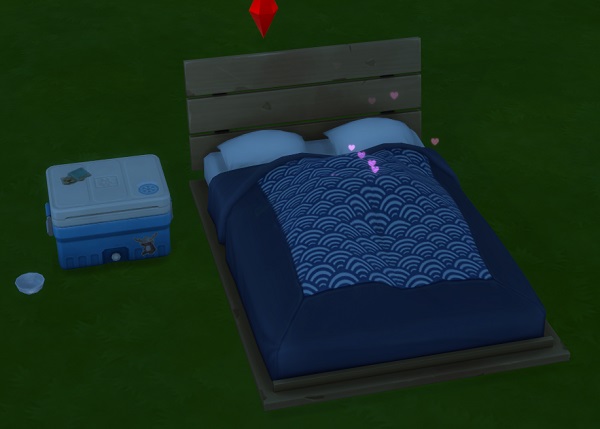 Finally having a bed to woohoo in! (And yes, I actually took a picture of a non-try-for-baby-woohoo.. but that bed was a major milestone in drifter land.. lol)

Gardening together. At this point, I just had whatever planted that I’d found, not the best (for money making) ones.

See? .. For some reason, the beginning of this house really seems to be moving in slow motion.

..Okay, that’s a little better. At least it looks like a house now.

… And it begins. Yay for handiness skill! 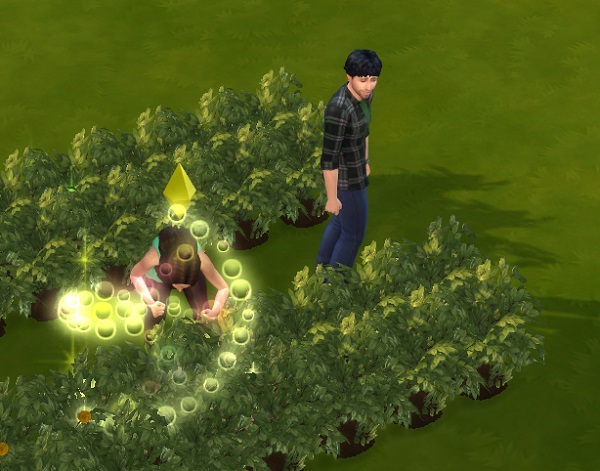 The part I hate of gardening.. the interminable evolving. 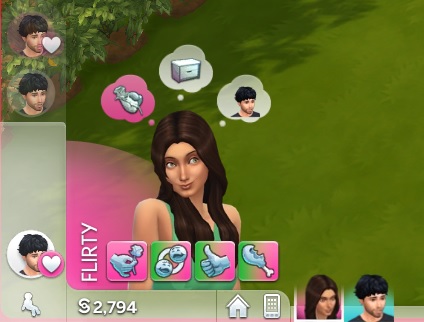 We have a little nest egg saved up.. it’s time for their wedding! 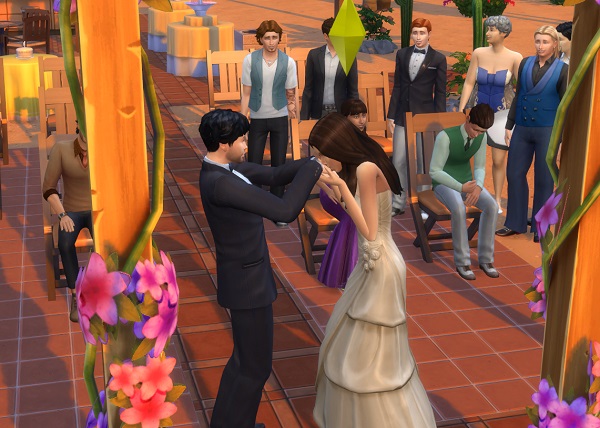 The guests are mostly milling about .. for some reason they don’t like the chairs I set out. Oh well. Pooh on them. (If you’re looking carefully at this pic.. there’s two things I’d like to point out. One, the cake is already ready (Ariana made one, not the caterer).. and that most the guests are past house members during the contest. Remember? I told them I didn’t want to be romantic anymore.

Such a pretty place for a wedding. 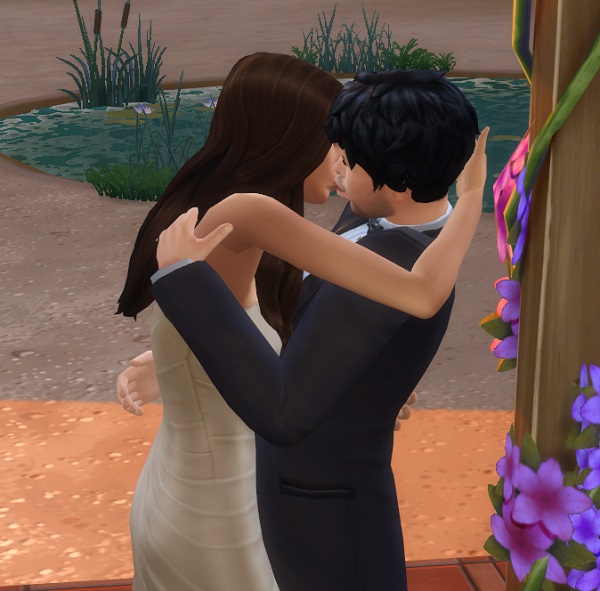 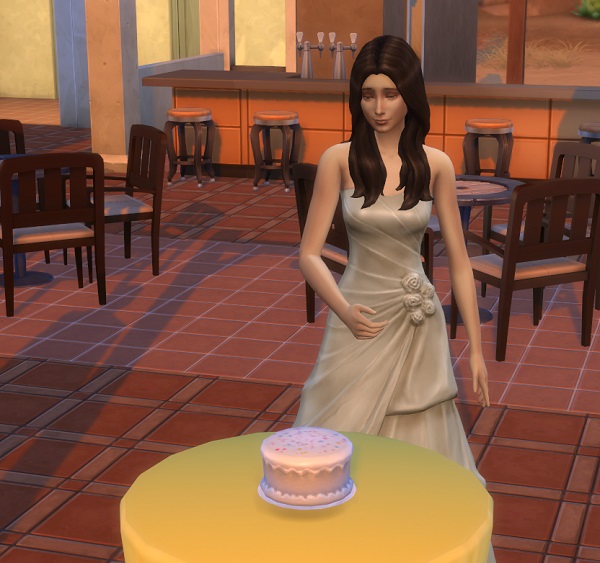 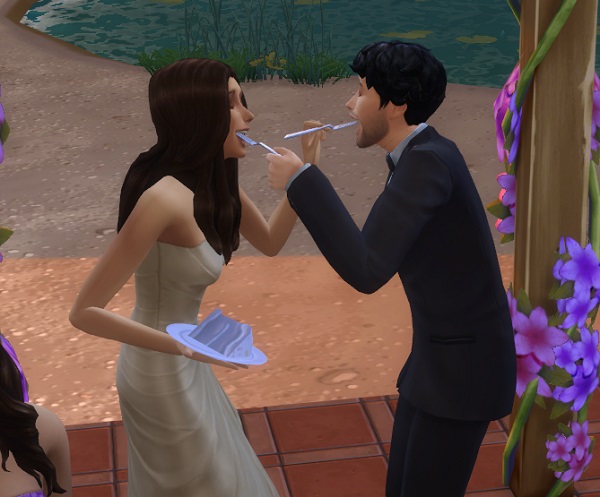 Aww… and they didn’t even smear it over each other’s faces. I always thought that was the best part of weddings. 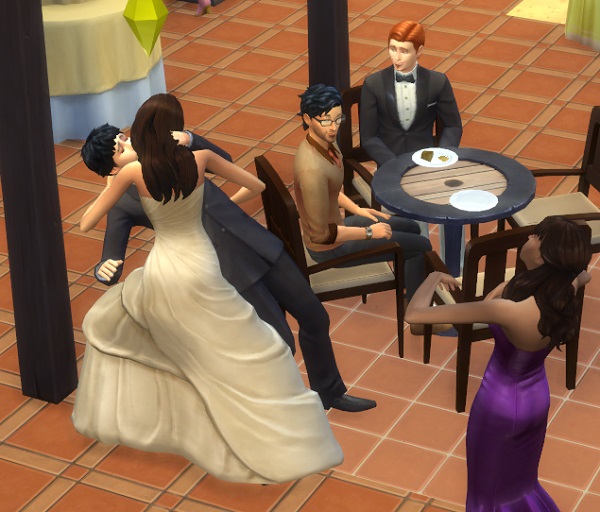 Notice Vincent lurking? Apparently this made him upset.. and Sean, too. Clearly they were hoping she was kidding about the “just be friends” thing.

Vincent being a creeper again. Oh and see this mixologist? I had to hire him separately, the first one I hired with the party never showed up. Waste of money!

.. Vincent is still creeping. But the wedded couple is so cute! (And yay for fancy flaming drink!)

Cousin Cole is clapping because they’re kissing? Not really, but it looks like he wants to!

Then my camera is rudely zoomed away…..

Oh no… not Kelsie!

Everyone (except Trent if you look closely.. he was napping on a bench by this point of the party) has to come watch.

And they stay to mourn for Kelsie.. who they’ve probably never met. Where’d Grim go?

… Here’s when I noticed.. Grim leaves puddles like the ghosts do. Too funny.. and they’re completely black, too.

Even the entertainment and mixologist and caterer (useless caterer..) are over there mourning.

Finally.. everyone’s back to work. See that caterer in the background?? She’s just NOW making a cake. Fail.

A perfect wedding.. despite Kelsie. My first one! 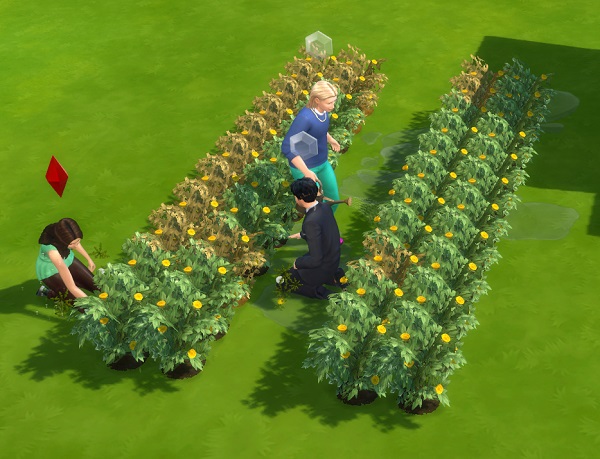 Back to gardening and saving money.

I was so annoyed at her having this two day sadness I had her take a moodlet solver. Trent (because he was sleeping, I guess) didn’t get the moodlet, so he felt just fine! I had to make the sad go away!

Time for the first date as a married couple.. we send them off to the diner. And .. wouldn’t you know it.. 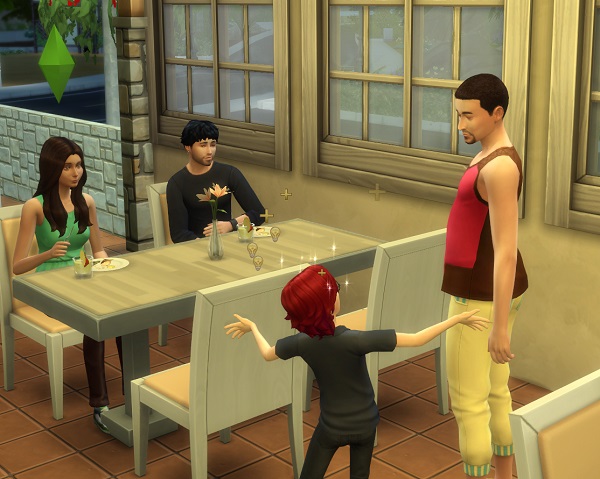 … but they have admirers. Sigh. I finally use the “go away” mean moodlet so they can stop making the conversation awkward. We’re TRYING to have a DATE here, dudes. 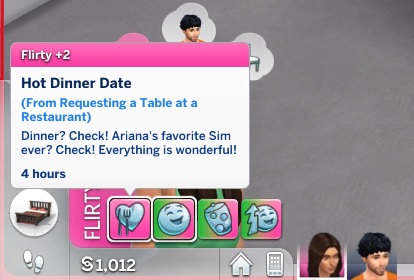 Early one morning the two of them find their new toys. An easel for Ariana (I got tired of her having nothing to do but stand around when she’s done collecting and gardening.. but I didn’t want to have her gone for a job.) .. and a handiness bench for Trent. Don’t know whether I can sell what it makes, but it’ll at least give him something to DO rather than go nap on a bench. Oh, and by this point, I’d bought them a better bed, in the hopes that he’d forsake his bench. (he did.. eventually)

Wonder if he remembers what those roses meant in Part 1? I sure do!

.. So the lot traits are helping the conversation.

Vincent is there again.. but at least this time he’s ignoring them instead of creeping. 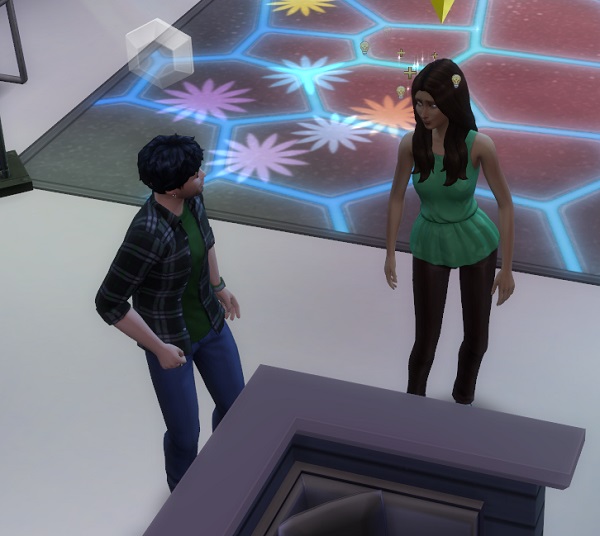 After the date goals are over, I have them dance for a while.. then send them home.

Another couple days of saving money.. and I had around 7.5 k.. garden is now making 2.5k+ per harvest, and it’ll only get better.. so I figured I’m pretty much set on getting funds .. and I’m far enough along in the aspiration… so.. 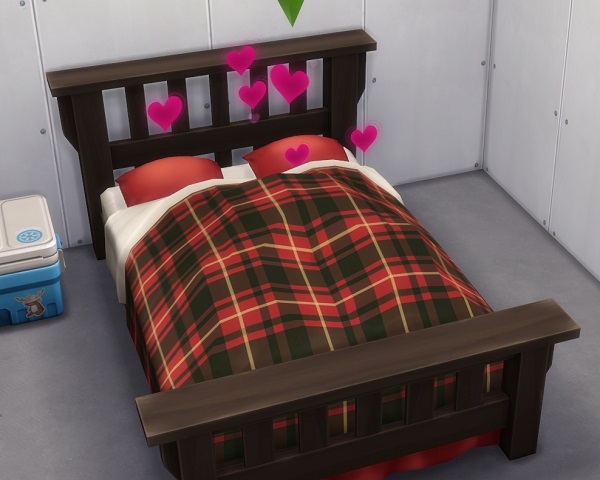 Yep! Trying for baby! I’m going to leave you here.. make you wonder if they’re preggo or not.

Oh, and why am I saving up? Because I built a shell I want to just plop down on the lot for them soon as they can afford it. (It’s about 25k) .. and this is what it looks like. I had a heck of a time trying to figure out what I was going to do with this house, I really had no ideas.. so I did a google search for colonial houses, and picked the picture of one that I liked the best. I got pretty close to what it looked like, too. 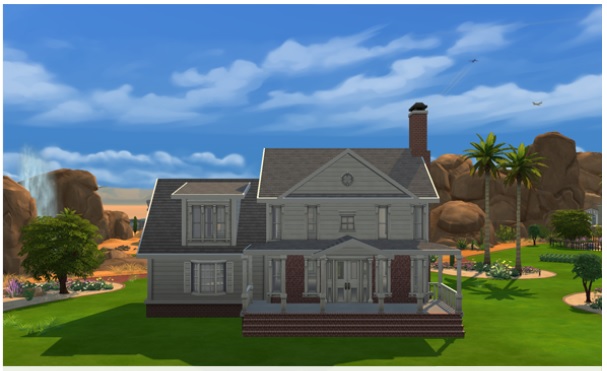 See you next time for the baby(ies?)!! – I did buy her the fertile trait!

I am a 43 year old American demi-gender wife, mother, and gamer. My pronouns are she/they. I've lived in the Midwest most of my life, and enjoy it for the changing seasons. My favorite movie is Labyrinth, my favorite game is Sims 4, and I have tattoos related to both. My favorite colors are purple, red, and green. When I'm not playing games (which is rare) I also enjoy music, reading, crafting, and coloring. My newest obsession is streaming Sims 4 on Twitch. I'm also an animal lover, and have had many types of pets over the years. Currently, I have a dog named Cassie who is a Jack Russel / Beagle mix and a trio of pet rats that we adopted from a local rescue. View All Posts