Introduction by the Author < | > A Surprise For Keira

Well, today’s the day. With both my parents gone before their time, and no other family to speak of, I have little to hold me to my home, and fewer options. Last week, on the news, they had a “human interest” piece on a series of mid-western towns that had been devastated by tornadoes. The only thing still standing was a small restaurant, and the people that had survived were understandably leery of moving back into the area. The local government was holding out a “carrot” for new settlers. A lifetime contract, if you will, to help rebuild the towns. I contacted the number listed, and spent much of my final teenage days in meetings and on the phone with the people sponsoring the contract. For a FREE plot of land, all I would have to do was build a house fitting their description – 2 bedroom 1 bath minimum and worth 30,000 simoleons. The design was left up to me, and they already had a contracting company ready for whatever I could dream up. The only catch seemed to be the stipulation that my first born.. and their first born.. and on down the line.. would be contracted to build their own house, as well. I tried not to get overwhelmed by the details… and I plunged ahead. I loved the idea of making a difference, of being able to leave a legacy behind when I was gone. Whether by bravery, stupidity, or fate itself – I was going for it. Everything was signed, sealed, and I was in the contracting company’s hired car with my meager possessions stuffed into one suitcase in the back. With a pre-paid cell phone, my suitcase, and myself.. I’m to be delivered to MY land. All mine. The excitement was unbearable, and the trip seemed to take forever. 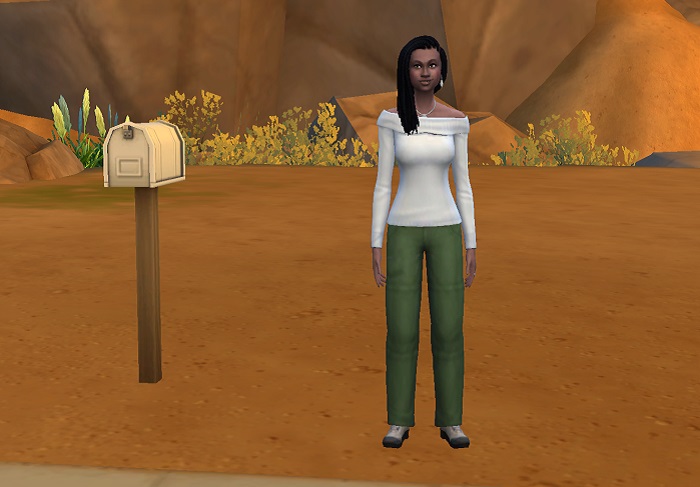 With little more than good-luck wishes and the aforementioned suitcase and phone, they dropped me off on the side of the dusty road next to a mailbox. A mailbox with MY name – Keira Traveler – already on it. I had no money, no shelter, and nothing to eat.. but they had helpfully left me with some basic survival tools – gardening tools, a fishing pole, and mess kit to eat .. well.. whatever I could find. The task had never seemed so daunting as it did when the car pulled away from the curb. For a brief moment, I felt like crying in loneliness, but, thankfully, it passed. With that moment of weakness behind me, I headed to the stream I could see running behind my house .. and prepared to learn to fish. It couldn’t be THAT hard, right? 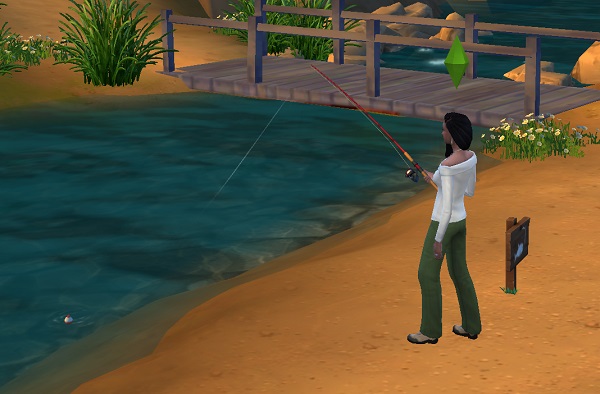 Hours later, having finally caught a few small fish… I figured I had enough for a snack courtesy of the grill at the “neighborhood” park. I eyed the plants in the planters there, hoping to see fruit, vegetables, or flowers that I could use to plant my own garden.. but they all appeared to need more time to grow. I had noticed a bunch of people walking down the sidewalks all day, eyeing me curiously, but I didn’t feel brave enough to meet new people just yet. 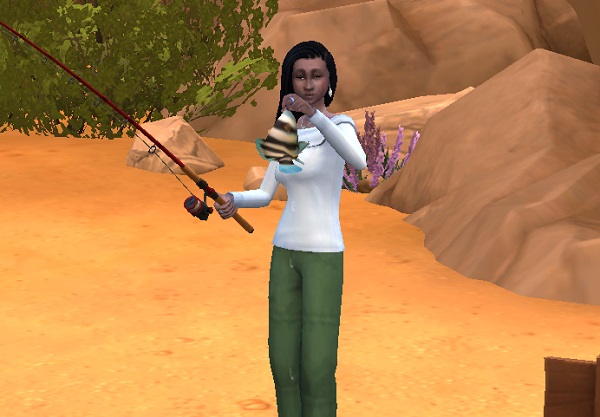 After my snack, I headed back for more fishing, and lo and behold.. I caught a cowplant berry. In the survival guide they had provided me with, I had made an earlier note about cowplants.. viable, growing baby plants could be sold for a nice chunk of change. So, abandoning the fishing trip, I went to see if this little berry would grow for me.

Amazingly, it did.. and I was able to purchase my first thing… a toilet. As you can see, it was none too soon.

Feeling much better… and finally with a real sense of hope, I watched the sun go down sitting on a sidewalk bench.. then curled up for a cold night of sleep.

The next day, things were definitely looking up. I managed to find some digsites with things to sell to the local traders. I spent a good portion of the day scrounging up what I could, along with more time with my fishing pole. By the end of the day, I had even found some flowers to plant in a garden of my very own. 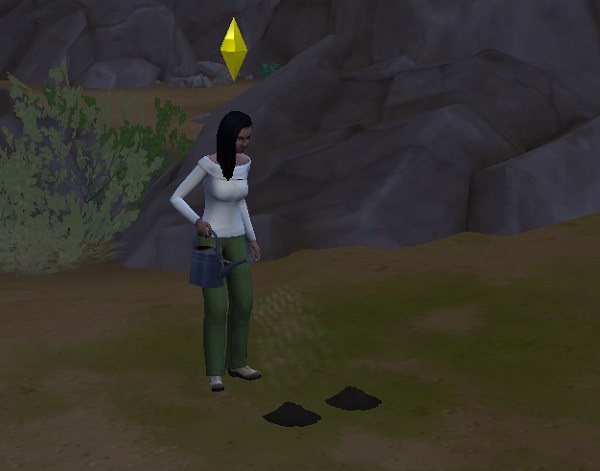 As the days went by, I started to feel more at home, and even felt brave enough to meet some of the people who continued to walk by, curious as to who might have been silly enough to fall for this town contract. From most of the people, all I heard was amazement that I would be willing to “give up” my life to the town and this government contract. Very few seemed to even think that I might have actually wanted the chance I was being given.

Luckily, not every one thought that way, and I met some people who I could relate to.. even one man who I really liked – Jared. He was a colorful sort of person, and seemed to really support the choice I had made. As the days went by, he and I seemed to get closer and closer. I noticed him keeping track of my growing campsite, and he seemed genuinely thrilled for me when the first walls were finally put up.

I wasn’t stuck to eating just fish anymore, either. With the acquisition of a cooler, I was able to eat cereal, yogurt, or granola anytime I wanted without dipping into the things that I found to sell. I got a used futon, and some more plumbing for my growing “bathroom”. I can’t even tell you how great it felt to be able to keep myself and my campsite cleaned up with bathroom fixtures. 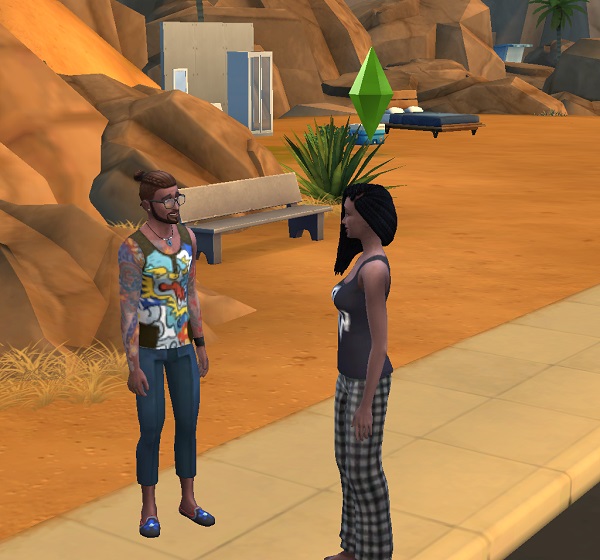 It was such a joy to see him, I would run after him any time I saw him walking by… even if I was just in my jammies. We could talk for hours.. although I rarely had that kind of time with my fishing, scrounging, and gardening taking up most of my time. Some days, I was even able to talk him into helping out around camp.

One day, I simply couldn’t wait any longer. I had to make a move since he seemed to be either too shy or too scared to make one of his own. He accepted my flirting, and, to my surprise, he even flirted back. He said he hadn’t made a move because he didn’t want to pressure me into a relationship he wasn’t sure I wanted. I quickly let him know that was definitely NOT the case, and planted a kiss on him that I hoped he wouldn’t forget any time soon.

More days passed, and Jared seemed to be spending more and more time at my camp. Finally, I asked him to move in. By that time, I had a bonafide garden and a bathroom, and felt I had a good start on building a home I hoped Jared could come to love, too.

Within a week of him moving in, I had convinced him to marry me… and we finally had a roof over our heads. I couldn’t have been happier. It wasn’t much of a house, not yet.. but I could really see the possibilities of my dreams coming true. 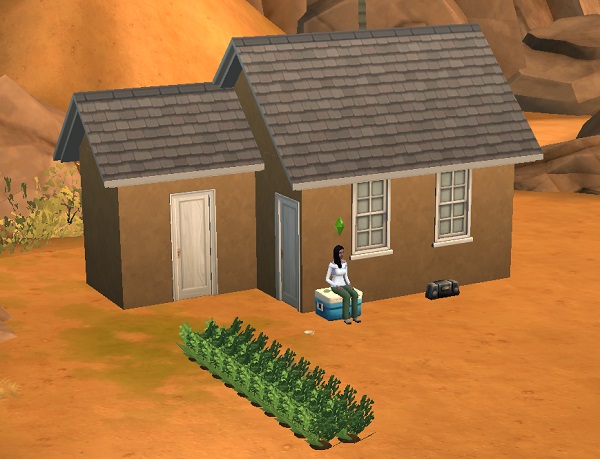 Jared helped around the house as much as he could, and even seemed to enjoy our daily gardening sessions. The chrysanthemums I had planted were really doing well, and were starting to really make some money. I had long since given up on a vegetable garden, because it simply didn’t make enough money to be worth it.

I finally was able to afford some decent appliances for our “kitchen”.. and I started teaching myself how to cook. I started small.. and even avoided using the oven until I felt confident that I wouldn’t set anything on fire. 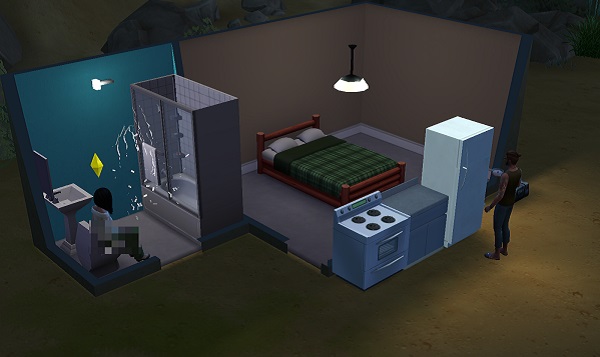 Then.. one night.. after a day of feeling rather queasy, I took “THE” test. Jared was surprised, but as happy as I was to find out I was expecting. My pregnancy went by pretty quickly (it seemed) and before we knew it, Caleb was born. Jared seemed a little overwhelmed by the baby, so I did most the care and left Jared alone outside with the garden.

I can hardly wait for Caleb to grow up, if nothing else.. so he can start learning how to take care of himself. Juggling the baby, collecting, and gardening really is taking a toll on me. It led directly to: 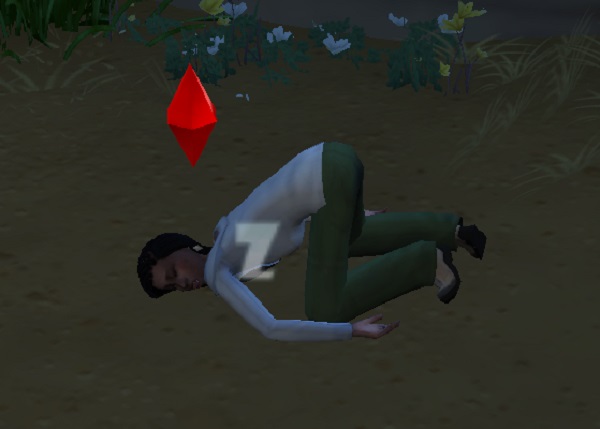 How embarrassing. I did finally make it back to my bed, though.. and I vowed not to let it happen again. Before I knew it, my juggling act had a new participant.. Caleb. Instead of just laying in his crib, now he’s into everything. I’m barely able to find time for gardening, but luckily Jared seems to have settled into his role as a parent and is helping out with Caleb more. Caleb is such a Charmer… always a smile for everyone (unless he’s not getting his way!)

He quickly picks up the basics – walking talking, and pottying. Okay, so it wasn’t THAT quick.. but definitely appreciated as he really is starting to be his own person.

I also found the time to meet with the interior decorator and get the house really looking like a house. As I make money from gardening, I’ll decorate it some more to get to the right value for the contract, but I don’t think it’ll be too hard to get to. It’s a simple house, but simple is just fine with me. I don’t need anything too fancy, and the stucco exterior seems to fit really well with the environment.

I have to say, it’s great fun watching Caleb grow up. He loves to play and dance, and is always following me or Jared around. I’m afraid I take far too many pictures of him, but I’ll try to show only the best ones.

Author’s Note: I know, I started a second drifter save, I’m completely crazy. And to blog BOTH of them? .. even crazier. I started this one while waiting for my new computer to arrive… and I think I’ve fallen in love with this little family.. or is it just the toddlers I love? Who knows. I also kinda wanted to try telling a story for this drifter save (the other one is just commentary-style).. whether that continues or not.. we’ll see. So far so good, though.

Introduction by the Author < | > A Surprise For Keira