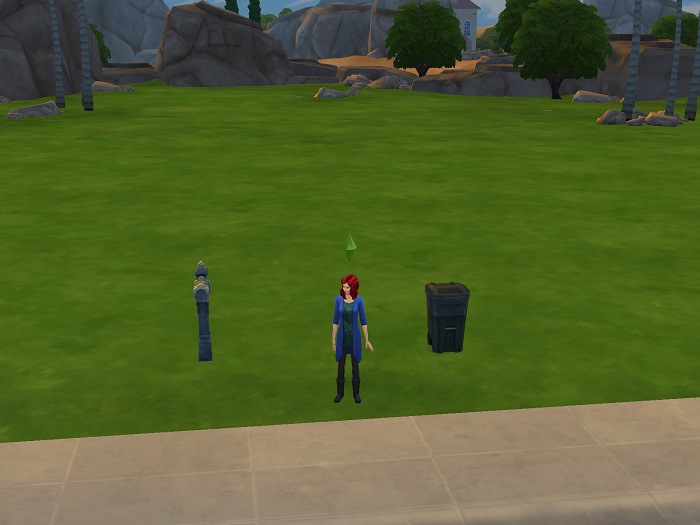 And the game begins. Maeve MacRae moves into her new lot… it’s certainly not much to look at yet, is it?

Luckily, that’s easy to change. Here’s her new house. She grabs a job in computer technology (it pays the most to start with).. what can I say, I’m a bit mercenary. Her aspiration is to find her one true love. 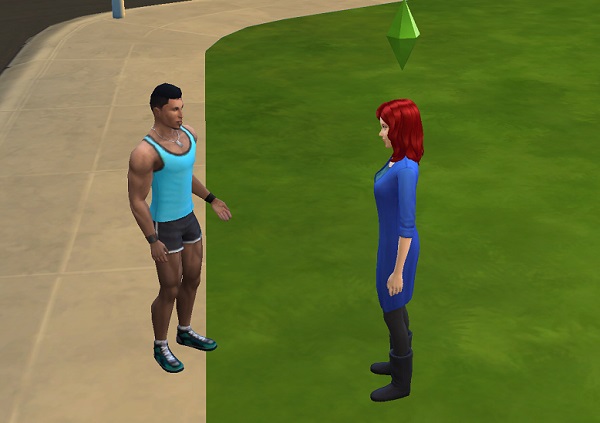 Almost immediately, she finds her first victim – Marcus Flex. I don’t know too much about him, he came with the Get Together expansion pack and I’ve only spent about a week of sim time with him.. the only thing I remember is that he’s single. So off she goes to chat him up. They’re nearly friends before the welcome wagon full of new neighbors show up and the conversation gets derailed.

A few new acquaintances for Maeve. She seems to get along particularly well with Katrina Caliente. After the little welcome party is over, Maeve invites Marcus back over. 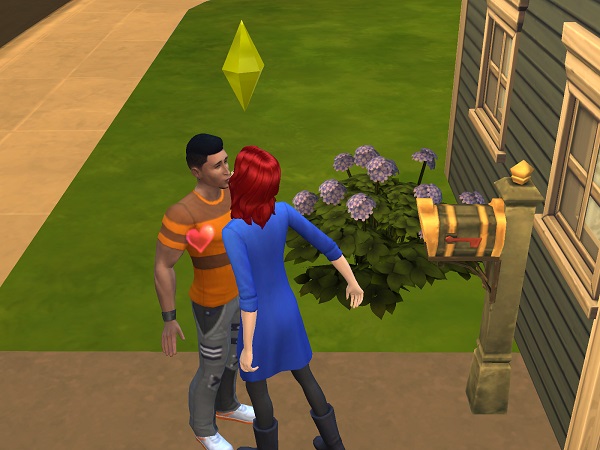 After a short chat, she turns on the charm. The plan goes swimmingly, and before long they’ve got their first kiss. Maeve then invites him out on a date.

As dates go, you could call this one just about perfect. The dark ambiance of Rattlesnake Juice Bar adds to the steamy conversation, and by the end of the date, Maeve has herself an official boyfriend.

The finish the evening off with a romantic look at the stars. 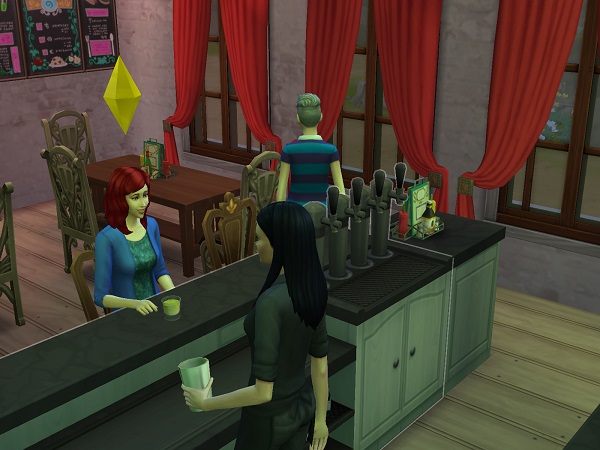 Maeve decides (on her own) to go order a drink before heading home, so I indulge her whim and watch her have a drink. 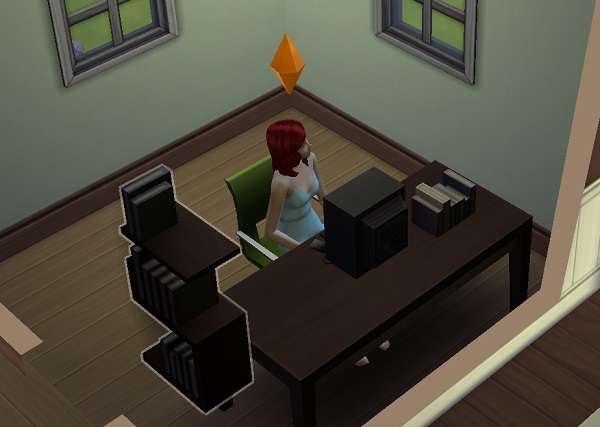 The next day is another non-work day, so I set her down to skilling work. This is where she’s going to be for a lot of her time, whether programming or gaming.

When she gets hungry, I have her learn cooking the safe way – making garden salad!

Another evening, another date with Marcus. (Which Don Lothario tries in vain to crash. No thanks, creepy man!)

It all seems perfect until suddenly Maeve discovers Marcus’ “Non-Committal” trait. Deal breaker! I quickly have her break up with him. Tears ensue, but they agree to be friends. 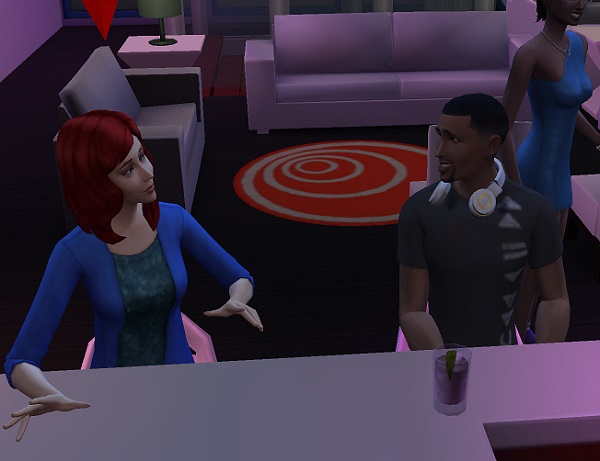 Now missing a boyfriend, Maeve immediately scopes out the pickings at the lounge. Dominic Fyres catches her eye.. another sim from Get Together. Again, I remember next to nothing about him, so I have her jump right into a conversation. She finds out his traits quickly somehow – Neat, Music Lover, and Self-Assured. And he’s an entertainer. No deal breakers there! The only drawback is that he’s already an Adult.

…. Ooops. Sorry, Maeve. This is a -5 penalty (which I completely forgot about), but the game goes on…. 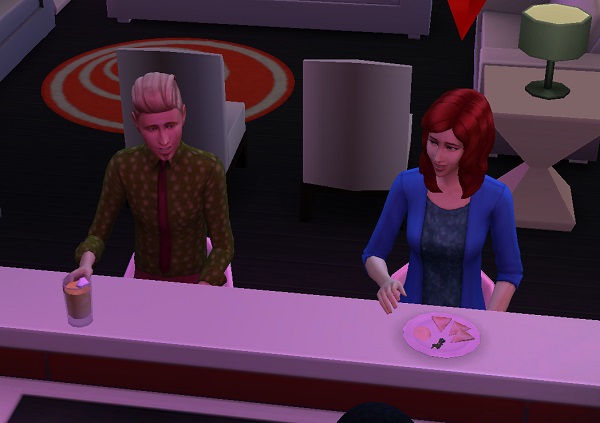 Looking a bit further, she spots Johnny Zest, who I know well and like. Another conversation ensues. She’s really hungry at this point, so I have her get something to eat and talk to him a bit. All in all, a good night. 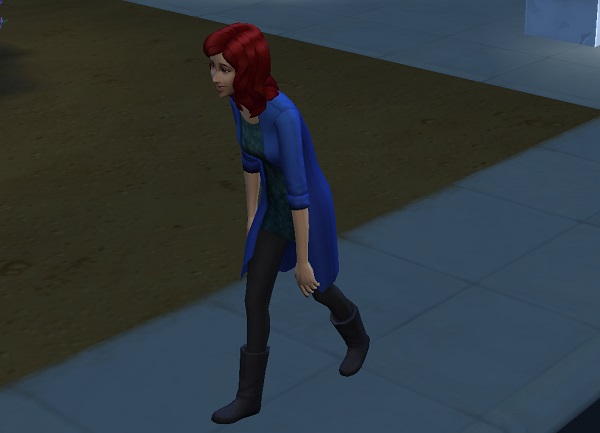 After finishing her hummus tapas, she trudges slowly off home, exhausted, only to pass out again on her front doorstep. Another -5. Sigh.

At work the next day, she gets promoted to Quality Assurance, which comes with a nice bonus. The next day, I invite Johnny over, only to find the two of them just can’t seem to get along. That scratches him off the list, and puts me back in mind of Dominic.

Another day of work, and once she’s back home, she invites Dominic over, and I hope for the best.

They seem to get along just fine!

Before too long, they have that all-important first kiss, and become boyfriend/girlfriend. 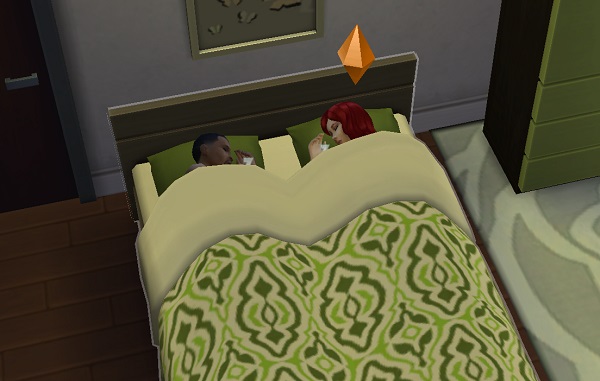 Maeve gets a little in over her head and asks him to stay the night, to which he readily agrees.

The next day, Maeve is back to work and gets another promotion, this time to Code Monkey.

Once home, she invites Dominic over, and flirts like crazy. Then, to my horror, I find out he’s married! She has the option to break them up, so I give her the go-ahead. He’s clearly miserable after agreeing to divorce his wife, so I send him home.

The next day after work, he’s still miserable, so I invite him to move in. (I can just imagine how awkward his home life is now that they’re divorced!) His first action is to crawl in bed and cry for a while, then take a nap.

So now it’s a waiting game … waiting for him to not be sad anymore.

I have Maeve make her first actual cooked meal (she’s been subsisting on garden salads while her cooking skill raises) – scrambled eggs. Dominic is still busy crying / napping, so I break the cycle with his one action as an adult – practicing on the little family’s new guitar.

As soon as the sadness wears off, they get married… and live happily ever after. No, wait, that’s a different story. (And man, I have to stop having my mouse over the sim when taking a picture…)

4 thoughts on “Those Crazy Irish Chapter 1.1”